The bane of public speaking: Why do we pace?

As we saw in the post about Fear of Public Speaking, when we get nervous we tend to move around the stage mindlessly in order to get rid of that extra energy caused by the rush of adrenaline. Because of this, whenever we see someone pacing onstage, we immediately judge them as being nervous.

Then there’s the other end: standing still during your whole presentation, sometimes even protected from the audience by the inscrutable wall of a lectern.

Neither option is recommended: both can make you disconnect from your audience.

When should you stand still?

You should stand still onstage when you want to transmit an idea. If you are fixed in a spot, the audience’s attention is entirely on you. Ideally, you should have a fixed spot onstage for every message you want to get through.

For example, let’s say that you begin your speech in the middle. For each point you want to make, you can use a different space onstage – this way the audience will associate your physical presence with your message. Think of it as visual memory: “oh, they said that while standing to the right.” 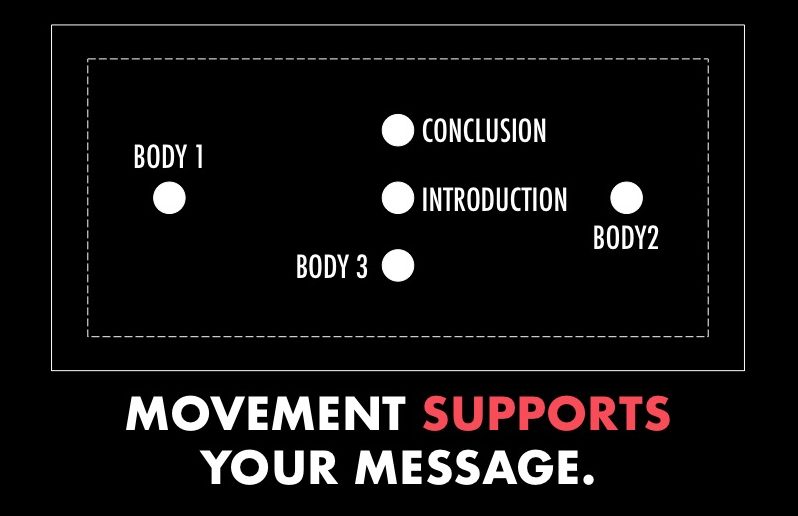 Standing still also helps with voice projection. If you’re not moving, you can stand in a more relaxed manner. This, in turn, helps you draw more energy from your breath. Just remember not to lock your knees!

When should you move?

Move during the transitions between points, knowing exactly where you want to go. If you walk knowing where you’re headed, your movements will be more precise. They’ll be cleaner. You’ll own that stage.

In theatre, this is called blocking: the precise staging of movements of the characters onstage in order to tell the story. Here’s a good explanation of the power of different movements onstage applied to theatre. Depending on the direction you’re moving towards, and on where you’re starting, the intensity of your moves will vary.

During the transitions between movements, take your time to pause and look into your audience’s eyes. This works wonders after asking a rhetorical question. If you want to talk, use transitional sentences that get supported by your movement (for example, “this leads us to the next question”). Don’t say anything important if you’re walking, or the words might get lost in the movement.

How do you decide when to move?

I usually divide the speech into its core parts. Then I draw a mental diagram of an average stage (like in the image above). Based on the duration of the speech, I decide to move more or less – but I try to change the spot every time I want to transmit a new idea. Once I reach the room, if the stage is smaller than I expected, I adapt my movements: they will be more subtle but will still draw attention and come through if accompanied by a good vocal modulation. If the stage is smaller than I expected, I either make the transitions slower or subdivide each part on the fly.

And whatever you go, just practise. The more stage hours you clock, the more you’ll get used to standing still to your advantage.  Here are some places you can go to practise:

DO YOU WANT TO KNOW MORE?

You can look at my services. I offer private assessment and workshops (corporate and individual).

Feel free to reach out!

With formal training in Biotechnology and Business management and administration, I have worked in different fields, always staying close to a stage. I am currently an actress and public speaking consultant, and I do workshops in different formats and for different types of entities. In 2016, I was awarded as Best Speaker in Spain by Toastmasters International. I also organise and present Ignite BCN, and I have been the curator of the Barcelona hub for Global Shapers, the youth community of the World Economic Forum.